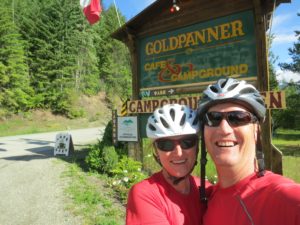 Some may say that we’re in our latter stages of our travelling careers; however, we respectfully disagree. We’re just getting started and the adventures that await us in this world are endless.

We started this blog in hopes of sharing stories, creating discussion on travel philosophies and tourism and providing some inspiration to those who think travelling is out of the question. Whether it’s a fear of the unknown, costs, or just plain laziness, we can provide some insight into what it takes before you hit that “purchase” button on your next plane ticket.

We started our overseas exploration in 2001, renting a car and traveling a month in Europe… Germany, Austria, Switzerland, and Italy. It certainly triggered a taste for travel so 5 years later, during a joint mid-life crisis, we decided as a family to pack up and hit the road for a year. Before heading out for “the big one”, we conducted a pilot project… a 3 week budget trip to Costa Rica.  As we were all inexperienced in this way of travel, we needed some questions answered… Could the three of us travel together, and could we travel on a budget, taking local transportation, staying in inexpensive accommodations, etc.? It was a successful pilot and the next year we pulled Torin out of Grade 8, donned our backpacks and on August 1, 2006 flew to Japan to begin our year of travel. We had the first 3 weeks of that year planned as well as a 6 week volunteer stint in Nepal which would start January 1 2007. Other than that, the year was an open book.

That year changed our lives as we traveled through Japan, southeast Asia and northern Africa. We volunteered in several locations and immersed ourselves in the local culture as much as possible. We climbed the highest mountains in several countries, trekked the Annapurna Circuit, Langtang and to Everest Base Camp, saw the pyramids, bussed through Libya, and spent weeks on the beaches of Tunisia.

So, who are we? We’re a couple in our mid-50’s that does not do well with routine, and so we continue to search for adventure, weaving in and out of our lives in Salmon Arm BC. We are totally grateful for our solid friendships back home that allow us to do what we love to do and without which, there would be no reason to go home. Thank you!