Our first day of riding took us from Lisbon to Sintra, a small tourist town known for its forests and castles.  We began by wobbling down the steep cobble stone roads of Alfama with our heavy load, needing to make it down to the ocean where the most amazing bike bath greeted us. It was the first day on my new Kona Sutra touring bike, the bike had not been on the road before this, and I found myself trying to figure out how to manage the bike and the 4 panniers I was carrying.  Eeeek!  Fortunately, once we got down to the water, the next 26 kilometres were heavenly as we cycled in sun, along the river on a flat path made just for bicycles. After that, we headed inland and steadily climbed for the next 20 kilometre, not as heavenly! Yup, I had a “hangry” moment after the first hill BUT a stop at a local neighbourhood café and warm bowl of vegetable soup and a sandwich gave me the fuel I needed to keep climbing 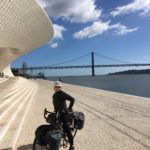 Outside the Padrao dos Descobrimentos 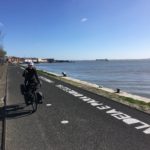 Riding along the coast 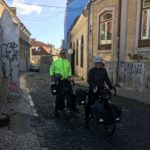 Ready to head out of Lisbon 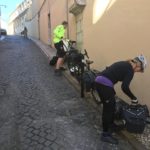 Preparing for our first ride 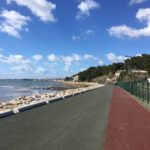 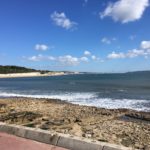 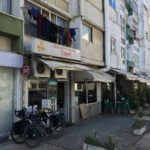 Lunch along the way to Sintra

Sintra to Vila Franca or ???

On February 5 we said good-bye to Torin in Sintra and headed out. We had a few challenges deciding which way to go but by that morning we knew the following:

We were excited to be riding and although it was cold, it was sunny.  A couple of hours into the ride we realized that I was following maps.me and Gerald was using his route created on Strava, and we were arguing about which direction to take.  We ended up agreeing to follow maps.me. A couple more hours later after several intense climbs, we stopped for a well deserved lunch at a local café. The scenery was spectacular as we peddled through little towns with colorful houses tucked amongst the rolling hills. Our direction challenges and climbing ridiculous grades did take away a wee bit from us really enjoying all the scenery.  I felt good and was pretty keen to make it all the way to our destination but all of a sudden it was 5pm and daylight was running out and reality hit. If we continued to follow the bicycle route that maps.me was taking us on we wouldn’t make it there before dark (Ger was convinced that the developers of maps.me truly believe that anyone on a bike likes to go up hills and on dirt paths). The last two hills we walked our bikes and were DONE. So Ger tried to find the closest place for us to stay and when we got there, it didn’t exist. Breathe!  Ger went back to his handy dandy phone and soon found an “ N” Road, which is a major road that brought us to the nearest town, Arruda dos Vinhos within 20 minutes.  Yes, this would end up being our final destination for the day.  We found a hotel at the first major intersection and then the most darling café, Ice.Come run by a local family that spoke English, for scrumptious chicken salad and freshly squeezed orange juice. A perfect end, to a challenging day of riding. Did I mention that we ended up climbing over 1000 metres that day, no wonder we were DONE! 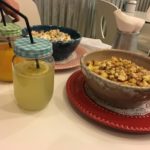 The chicken salad at Ice.Come 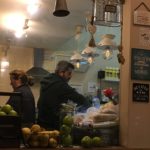 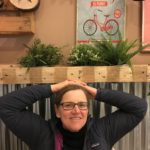 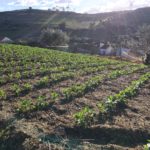 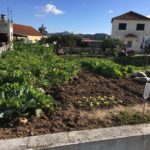 What a bountiful land 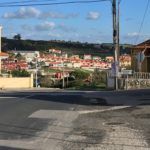 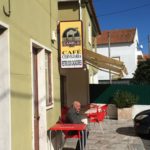 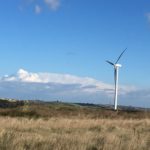 So we weren’t going to repeat the direction challenges of the previous day and by morning Ger had a new mapping application downloaded, RIDEwithGPS and I decided to let go and let him take the lead on finding our way. It was freezing cold when we started out of Arruda and thankfully (yea right), our first task was to climb out of the valley so needless to say, by the time we got to the top, we were warm and toasty.

We had ended up missing our final destination the previous day by only 9 kilometres. We know we could have made it had we not followed the bike route that maps.me had on us on.

We reached Vila Franca, a vibrant town on the river, within an hour and stopped to take care of some basic needs (a sim card for Mary’s phone) and a bite to eat.  Lunches have become a standard fair; a bowl of creamy vegetable soup, a sandwich or an empanada, a drink called Frize (lemon flavoured carbonated water), followed by a shot of espresso with a half a package of sugar. This has given us the energy to carry on for several more hours of riding. After we crossed the bridge, the geography changed significantly… a lot more trees and orchards, leading into the vineyards around Pegoes and for a change it was FLAT!

Pegoes itself was a strange little town.  I believe that it was once a very prosperous town situated at a crucial junction of two main roads.  Some years ago, a major highway was built 5km down the road bypassing the town of Pegoes and I would argue that it had a major impact.  We were the only customers in what was once a grand old hotel… we were also the only customers in the restaurant beside the hotel.  It was a very strange feeling. 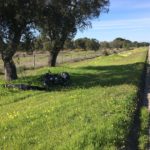 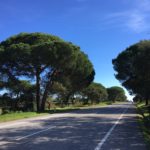 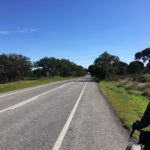 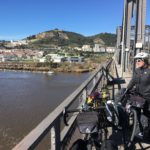 Looking back at Vila Franca 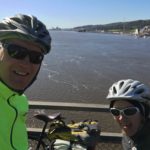 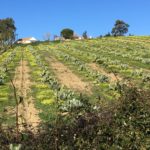 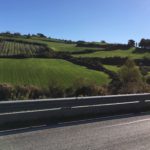 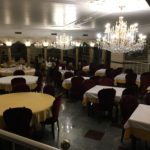 We changed direction this day and headed east.  Though we did end up climbing 732m this day, the real challenge was the wind, coming out of the northeast, not Mary’s favorite and she admittedly gets a bit grumpy, but she puts her head down and works her way up those climbs like a trooper.

The scenery along the way was idyllic with rolling hills, farmland and animals; we enjoyed stopping periodically, trying to capture the moment.

We rolled into Evora, a famous medieval stone walled city, late in the afternoon, and after winding our way through the narrow cobble stone streets of Evora we found our boutique hotel, The Nobel House. Mary had booked this last minute with booking.com and got a great price for a beautiful modern spacious room with a king size bed! It was a REAL TREAT. 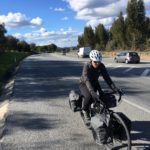 Mary hitting the top of the climb today 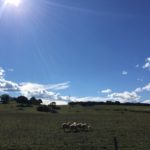 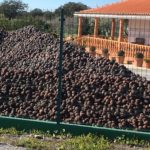 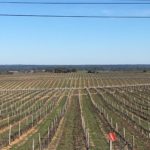 Hectares and hectares of grapes 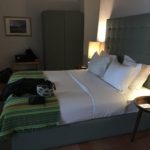 Our room at the Noble House in Evora