Lisbon: Our Introduction to Portugal

There is of course a lot to do and see in Lisbon and sometimes it is hard to know what to choose when you land in a new city. We always try to balance time needed to get over jet lag with getting out there and doing stuff. To our surprise the city was filled with tourists despite it being the low season. We learned that Lisbon has become a desirable city to visit, regardless of the time of year.

Our picks of activities over a three day period were:

Walking to viewpoints all around the city, including one on the rooftop of a mall, believe it or not! We were guided by Torin who seemingly after one long run through the city the day before our arrival seemed to know all the streets to take. He most definitely has an aptitude for directions and his mother and now even his father just trust him to get us to where we want to be. 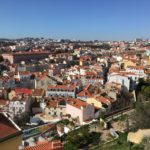 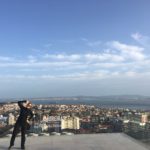 On top of the mall 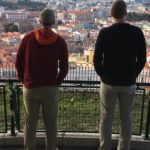 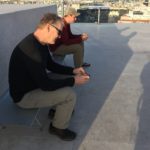 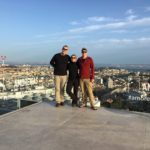 This was our area of choice to stay in during our time in Lisbon and it was a good decision as we were centrally located and could easily walk anywhere. The narrow cobble stone streets were great to explore and you never knew what you might find around the next corner. We found a great little neighbourhood convenience store where we bought breakfast items for a “do it yourself” breakie at our Airbnb; a sunny lunch spot tucked away in another corner as you walked up a long flight of stairs; a solo guitarist playing amongst the castle ruins; and graffiti that was really cool as well as some that was disturbing and prompted a discussion on the impact of tourism. We unfortunately missed hearing any Fado music which is also what the area is famous for, primarily because it started at 11:00pm and we were too tired to stay up that late. We are middle-aged meanderers, after all! 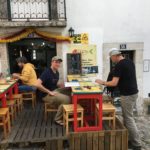 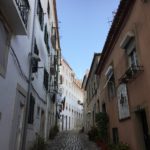 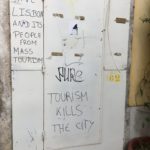 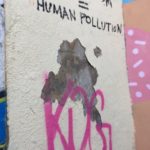 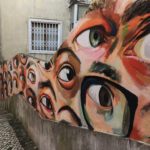 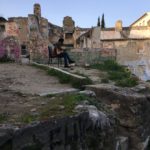 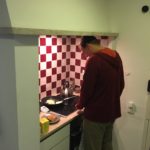 Our personal breakfast chef at work 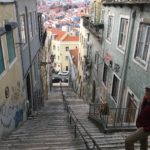 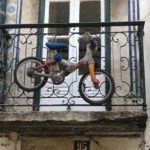 We have learned that a great way to learn about a city is too try and tap into, what is advertised as a Free Walking Tour. It is a bit of a misnomer because the expectation is that you donate monies to your guide after the tour as this is how they make their living. Generally speaking, we have found the tour guides to be quite knowledgeable and informative and are happy to give them monies for their efforts.

Lisbon Facts That We Remembered From The Tour

Lisbon has some of the oldest building in Europe because it escaped destruction during both World Wars.

A major earthquake in I755 however did destroy parts of Lisbon. The Alfama area was spared because it is built on granite whereas the rest of the city is build on sandstone and limestone.

Portugal has a strong Arabic influence. You can see this on the many buildings around the city that have beautifully tiled walls.

Portugal was a dictatorship until April 25, 1974 at which point a peaceful military coup asked the dictator to leave and he peacefully stepped down and the country became a democracy. How novel it would seem that currently other countries could learn from this way of doing things.

Portugal had a leader that they didn’t like so they built a monument of him in the main square by the ocean and gave him a toilet brush instead of a sword; put his back and his horse’s rump towards the city to show how he had turned his back on the people. It was a strange monument. 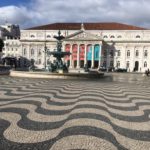 Waves represented in a square 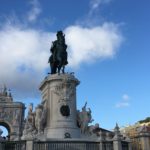 A lame leader (toilet brush instead of a sword) 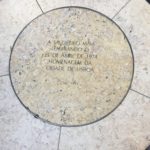 Where democracy was introduced to Portugal 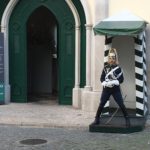 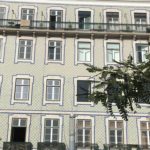 Port Tasting at the Lisbon Winery

This was a very thoughtful Christmas gift from Torin, although he admittedly benefited from it as well and was our one preplanned activity. It was an incredible evening of tasting 6 different ports, one of which was 24 years old. We tasted three different olive oils; cheeses: goat, sheep and cow and one mixed cheese that included the milk from all three animals; and a variety of smoked meats. The last delicacy was smoked shaved pork from the leg of a pig which was sitting in the room with us all evening. We all thought it was a wooden carving and part of the décor of the restaurant until we watched our waiter shave off some of the meat on a plate, just for us to taste. Needless to say, 3 hours later we walked out, with new found knowledge on “real “port versus fortified wine, our hunger satiated with local treats and overall wonderful evening. Thanks a whole bunch, Tor! 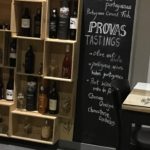 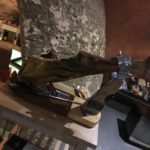 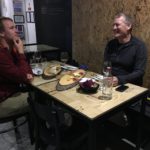 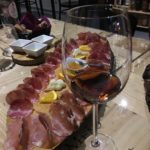 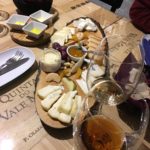 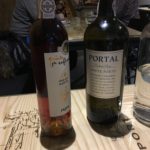