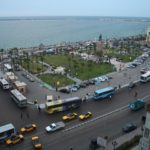 Alexandria’s eastern harbour (as seen from our hotel room) 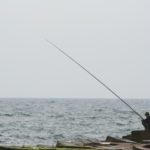 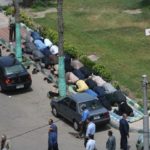 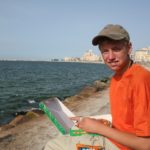 Eating pizza on the sea wall 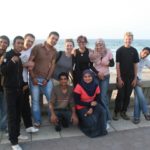 Meeting a group of students from Alexandria University. The woman to the left of Mary is Addy from Vancouver. 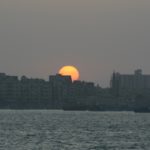 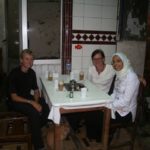 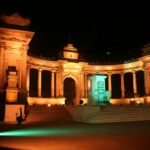 The tomb of the unknown soldier in Alexandria

Alexandria is about 2.5 hours north west of Cairo on the Mediterranean Sea. The part we frequented was quite beautiful and the air was salty and fresh as long as their was a breeze coming off the sea. It’s a great place to hang out – lots of coffee shops to visit and windows to shop in ;-). We used it as a base to come up with a plan for the following month in Egypt as well as the remaining time on this year long adventure.

In that regard, we determined that we would head to Marsa Matruh for some time on the beach. Then head to Siwa Oasis, then back to Alex, Cairo, Bahariya Oasis, Luxor, Dahab, Sinai and then back to cairo. From there we would take a bus across Libya to Tunisia (a mere 32 hour bus ride to Tripoli and then another 12 to Tunis). That was conditional on getting a Libyan transit visa which we weren’t sure we would be able to do. As the consulates close here on Fridays and Saturdays we had to wait til Sunday before I could pay a visit to them. They were quite receptive and said it shouldn’t be a problem as long as we hadn’t been to Israel in our travels.

We were also able to connect again with Yasmin and were able to take her out for supper as a thank you for helping us on our previous visit. We had a great evening, dining on fresh fish and prawns, walking along the sea wall and then she treated us to a dessert of rice pudding and ice cream. She was a wealth of information and definately helped us to understand more of the Egyptian and Muslim cultures. She is an English teacher here in Alex but is trying hard to leave Egypt – applying for a visa to Sweden where she has a friend. If that doesn’t work, we’ve invited her to join us traveling to Tunisia where she also has several friends.

She and Mary met again the following evening to shop with Torin and I joining them later for tea. Interestingly, at that time we had been in the country more than a week and aside from the tourism office staff, she was the only egyptian woman to speak with us. The Egyptian men had no issues with speaking to forigners but the women simply wouldn’t.

We did a bit of sight seeing in Alex visiting the Catacombs but cameras were not allowed inside so there is no photo-documentation of our visit. The site itself was impressive -it was a burial site dug 35 metres down through the rock and numerous chambers were they “filed away” the dead. They even had a “party room” down there for family members.

All in all, most of our time here was used in a more practical sense – planning, internet, email and rest. May 7 we were off to Marsa Matruh and Siwa.