So one of the reasons we ended up deciding to explore this area was in order to do the following:

Reguengos de Monsaraz is a small working class town and is a stopping point and transport hub for Monsaraz which is a small medieval village on a mountain top, 14 kilometres away. We decided to stay in town because we didn’t want to do long uphill cycle to the top of Monsaraz with all our gear but in hind sight we would have been fine and could have easily made it to the top, well maybe with a little bit of bike walking.

Anyway, we stayed at Casa Da Planicie, which means a house with a view of the valley, in Reguengos de Monsaraz and had the pleasure of meeting Sonja and her father. Sonja is a lawyer by profession and along with her father decided to take on the project of renovating her grandfather’s house and turning it into a guest house. She told us that she had been working on the project part time for approximately 10 years, going back and forth between Lisbon, which is where she lives, and they finally opened the guest house last year in April. Since we arrived in low season and during a cold spell, we were the only ones in the guest house for the weekend and enjoyed some local treats that her father picked up for us for breakfast every morning.Check out the photo! It was pretty chilly in the house and they did their best to get a fire going in the fireplace but to no avail.  Sonja thought there might be an owl’s nest in the chimney preventing the smoke from flowing out, and entering the room we were sitting instead.  We enjoyed chatting with Sonja as she had pretty good English and was able to give us some insight into the culture of Portugal.

Cultural Tip from Sonja: What is a BICA?  The acronym stands for “beba isto com azucar”. This means; drink this with sugar. Sonja told us that before coffee and espresso machines came into existence the coffee was not nearly as strong and the people could drink it black; to encourage them to adapt to the new methods of making coffee, it became popular to tell people to just add sugar, hence the term BICA!

Our day of cycling without panniers was so much lighter. We managed to get a map the day before of where to find all the various megaliths in the area and had a great time cycling about the valley locating them and ending up at the top of the mountain in Monsaraz. Megaliths are prehistoric structures created between 5000 to 7500 year ago. The various menhirs (individual standing stones that we saw) point to fertility rites, and the cromeleques (organized sets of standing stones) incorporate basic astronomic orientations related to seasonal transitions. The first megalith we saw was called the Lover’s Rock. At this megalith, it is the tradition for a girl to throw a rock over her shoulder and have it land on the top shelf. As many times as it takes her to do this successfully is how many years it will take until she gets married.  Thankfully, I am married and didn’t have to throw a rock but instead took a picture of my guy and me by the rock.

Unfortunately the pottery town was pretty quiet as it was Sunday morning. I did manage to see one potter at work but was not allowed to take a picture of him. We did stop in a couple of shops but as we are cycling, it just didn’t make sense to indulge and buy a keepsake. We managed to get a few photos of the wonderful work that they do here but would be great to come at a different time.

Monsaraz, oh, what can I say, despite the weather being cloudy and over cast, it was an enchanting spot to spend a few hours in. The steep and, I mean steep, cobble stone streets, the fantastic 360 degree views over the valley and the exploration of the ruins of the castle / coliseum were all magical.

We had planned to have lunch up there but it was the weekend and every restaurant that we tried was full and involved some waiting time to get a seat. Consequently, we ended up in a café where we had terrible service and mediocre food and left disappointed; but “them’s the breaks”, every travel day isn’t always made of perfection. 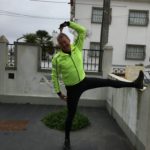 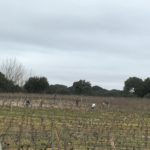 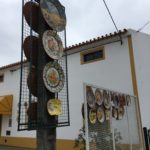 A pottery shop in Corval 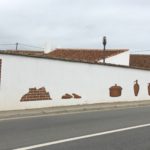 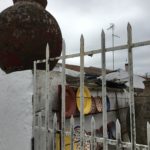 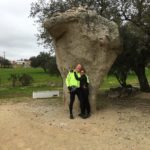 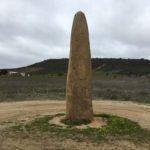 Menhir de Bulhoa (something to do with fertility) 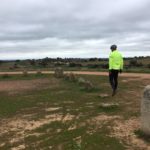 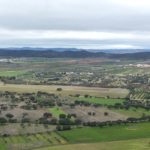 The view from Monsaraz 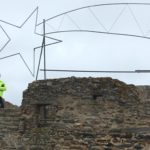 The star of my life 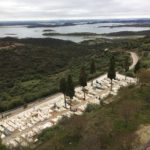 The local cemetery / They have quite the view 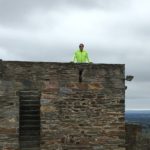 Ger overlooking the ruins of his castle 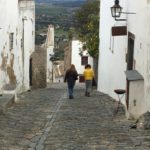 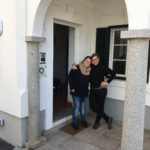 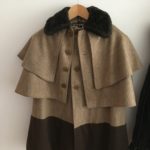 Sonja’s capote (her coat from when she was young) 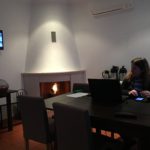 Working hard to make a fire 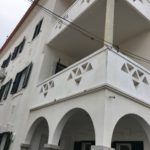 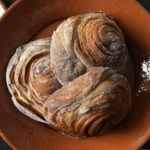 Back to the rest of the blog posts…  click HERE