I think it is about time to talk a little about the gear that we have with us… what did we feel we needed to complete (or at least start) a trip like this. 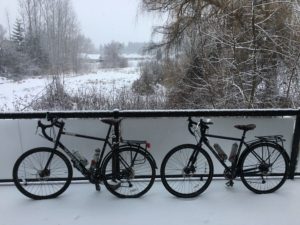 First and foremost are the bikes. We were fortunate enough to have picked up 2 Kona Sutras over the past 8 months, which we feel are the ultimate in touring bikes. Not that we’ve had a lot of experience with other touring bikes but these seem to have come with almost everything we needed in a touring bike. I say almost because there were a couple of items that we did need to purchase separately.

So first, thanks again to SKOOKUM CYCLE AND SKI in Salmon Arm for their help with the bikes, spending the time to fit Mary’s bike for her, and doing last minute maintenance before we left in January.

The Kona Sutras come with 27 gears, and when you’ve got 4 full panniers, water bottles and yourself to propel up the hills of Portugal, that lower set is probably the most important component. I think of my Kona Jake the Snake that I took to Cuba last year and I believe I would have had trouble with the hills here if I had that bike on this tour; it just isn’t geared the same. I’m not a true component guy… if it works and doesn’t give me any grief, I’m happy with it. But beyond that, I couldn’t tell the difference between good components and great components, and in this area, I do rely on the staff at Skookum to ensure I have what I need. 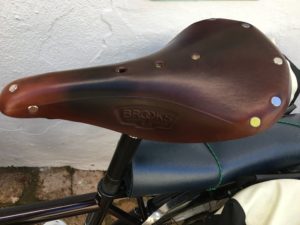 The fact that the Sutras came with Brooks leather saddles also played into the decision to purchase these bikes. I picked up my bike in the spring of 2017 and rode it with the Brooks saddle for most of the summer. After about 1,000 kms I put it aside, feeling like it wasn’t ever going to be broken in, and I did have a comfortable saddle to go back to. When Mary got her Sutra, we made a commitment to make a concerted effort to break them in on this trip. I did a bit of research, ordered some Neatsfoot oil and for two weeks, oiled the saddles every day. By the time we were ready to go, there was evidence that they were conforming to our respective sit bones. At this point in the tour, we’re both riding without padded cycling shorts and the saddles are feeling great (as are our sit bones). I didn’t bring any neatsfoot oil with me but I did bring some bees wax that we would normally use to condition leather boots, and I will apply a layer of that on the underside of the saddle every two weeks or so.

Interestingly, my bike, in the spring of 2017, came with Clement Cycling X’PLOR MSO tires (700×40) and Mary’s bike, late fall of 2017, came with Schwalbe Marathons (also 700×40). I’ve used Schwalbe Marathons in the past and have been impressed with them so I considered swapping out my tires for a pair of Marathons too. However, my tires also had good reviews and they were a bit lighter so I thought I’d give them a try. 400 kms into our tour and it was me who got the first flat, does that prove anything? Maybe it’s too early to tell. For sure, the 700×40 is a good size to tour with, especially in Portgual where there is a lot of cobblestone and gravel.

One of the components that came with the bike that didn’t meet my expectation was the front racks. To be clear, these were the racks that came with my Sutra and the one I had several years ago (stolen… long story). They were simply a pathetic design and I tried several methods of fitting them to the front forks without success. The last small tour I did I had to zip tie them to keep them in place. So I threw them out and bought 2 Axiom Journey Suspension & Disc Lowrider Front Racks. Beautiful. They fit great, though I did have to put some padding between them and the forks, but they came with everything I needed to install them and keep them secure.

We also picked up 2 pairs of Arkel waterproof panniers (Orca 45). We picked Arkels because their reviews were as good as Ortliebs and they were made in Canada. It also sounds like quite an amazing company and if you have time, check out their website HERE. We also borrowed Peter’s Ortlieb panniers (thanks Peter!) and I have a pair of our old MEC panniers for the tent, tools and other gear that isn’t so critical if it gets wet.

My phone is a pretty critical piece of equipment. We ride exclusively with digital maps; we do have a paper map with us but the detail isn’t great. We started out with Strava and Maps.me and then moved to RidewithGPS, and maps.me for in the cities. The move to RidewithGPS was made because of the lack of information that

I was getting from Strava. The first two days of riding, I was wanting to know how much further we needed to ride following the route that I created, and I wanted to know how much elevation I had to gain yet. RidewithGPS gives you all of that. I can create the route on my computer, pull it up on my phone and ride it. At any given time, it will tell you how much elevation you’ve gained and what’s left, and it gives you the elevation profile of the route and shows you exactly where you are on it.

At this point, we’ve cycled almost 700 kms and I posed the following questions for both of us…

Interestingly, my answers followed a more technical theme, than Mary’s answers… or maybe that’s to be expected.

It does feel that with the purchase of the Kona Sutras and other gear that we are set up pretty well. Given that we’re still borrowing gear, the next purchase should be another set of Arkel panniers and I’d love to pick up new, easily detachable handlebar bags.

After now 1200 kms, I’ve had 3 flats on my Clement tires (Mary hasn’t had a single flat), and the back tire is bald.  Unbelievable.  I wouldn’t ever buy Clements again, and will go for Schwalbes every time.  In fact, here in Malaga, I threw out both Clements and replaced them with Schwalbe Marathons.

Back to the rest of the blog posts… click HERE